January 29, 2019
The new year invariably brings with it a host of new convictions for the ensuing months ahead: whether to eat less, move more, give up bad habits or adopt health-enhancing fresh ones. One of our family's intentions is to aim for one meat-free meal a week.


My husband was the first to moot the idea (surprising in that he is the most wedded to the notion of a meal not being a meal in the absence of a meat component). I have long considered moving to a more plant-based mindset for reasons of giving the digestive system a break, environmental uneasiness and also potentially cost effectiveness (in hindsight the latter seems misguided). My daughter was deeply sceptical at the idea of roasted aubergine instead of roast chicken (but when I rolled out stuffed peppers with a side of quinoa she declared it delicious!). My son has often proclaimed his desire to be a vegetarian, down to his general dislike of the texture of meat, yet suddenly did a 180 and became the strongest opponent to the family's meat-free meal bill.

So whether we continue with this weekly habit only time will tell. For now it is being upheld but regardless of its longevity, I know that I can always have a meat-free lunch any day of the week I choose.

Snow is forecast for this week so the desire for an alternative to a cold crisp salad was called for.  This bowl of roast sweet potato and roast celery is full of warming flavours of cinnamon and rosemary. Hemp hearts are high in essential fatty acids, protein and minerals. There is crunch from toasted almonds and bursts of sweetness from soaked raisins. Keep any leftovers in the fridge for the next day. 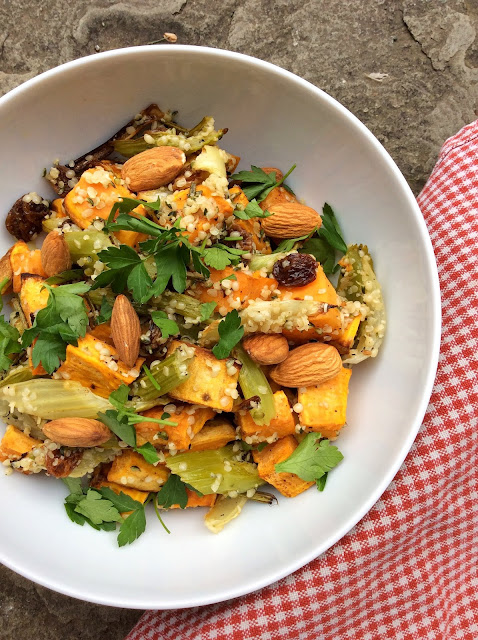 Instructions:
1. Preheat oven to 190 degress celsius, 375 degrees farenheit. Line 2 baking sheets with parchment.
2. Soak raisins in boiling water and set aside.
3. Toss sweet potato cubes in 1 tbsp olive oil, 1 tbsp water, cinnamon, rosemary, salt and pepper, before arranging in an even layer on a prepared baking sheet.
4.  Toss celery and onion pieces in 1 tbsp olive, salt and pepper, before arranging on second prepared baking sheet.
5. Bake potato on middle shelf of preheated oven and celery on lower shelf for 30-35minutes, or until starting to brown on edges, giving everything a quick toss halfway through.
6. Remove from oven and allow to cool.
7. Add cooled sweet potato, celery, onion to a bowl with hemp hearts, and drained rasins. Squeeze over lemon juice and mix through. Season with additional olive oil, salt and pepper if needed.
8. Just before serving add some roughly torn fresh parsley and a scattering of toasted almonds. 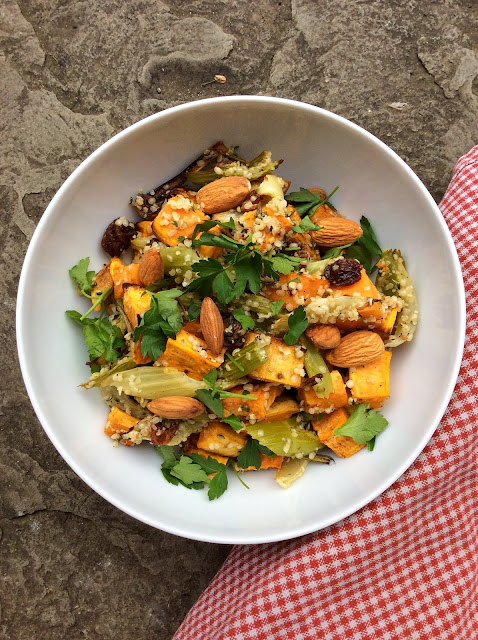